I’ve been wanting to try out the Fleshlight shower mount for a long time so I finally took the plunge and got one.

What is the Fleshlight shower mount?

It’s an attachment for those of us that enjoy using the sleeve in the shower.

It has a holder for your favorite Fleshlight and the trademark suction-based adjustable mount lets you ‘hold it’ securely in the your shower for a hands-free pleasure boost.

I was a bit concerned with how strong the suction of the accessory would be but after giving the mount several sessions, I have to say that the high-quality build and trademarked technique of the suction almost felt like it was permanently stuck to the tile.

To best part is it lets you use any one of your favorite Fleshlight in the mount. You simply unscrew the regular cap from the bottom of the Fleshlight you want to use and screw the shower mount in its place. Now you have a Fleshlight mount! 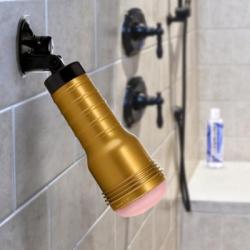 Then you hold the suction cup to a smooth part of the wall and secure it by moving the on/off suction switch to the on position for a strong hold.

You can also adjust the angle of the Fleshlight by loosening the wing nut on its side and tighten it when you’ve got the angle just right.

It’s just as easy to take off by moving the mount switch to the off position.

You can see on the left what it looks like when mounted and ready go in the shower. It’s certainly hard to resist when it’s almost calling out to you with each shower, if you know what I mean.

So what does using the Fleshlight Mount feel like?

The hands-free advantage is certainly the number one reason to own his accessory.

With my favorite pussy sleeve, and a vivid memory, it felt surprisingly similar to me going to town on my girlfriend from the rear in the shower.

When I switched out to a mouth sleeve, with a generous amount of lube, you can just imagine what it felt like as I slowly thrust in and out of it with my hands by my side.

It’s the closest I’ve come to feeling like a real oral experience in the shower. And my second most realistic experience overall, behind only the remarkable Fleshlight Launch.

Now I know why it’s one of their best sellers. Based on my shower mount review, you can probably tell how much I look forward to my time in the shower every day!